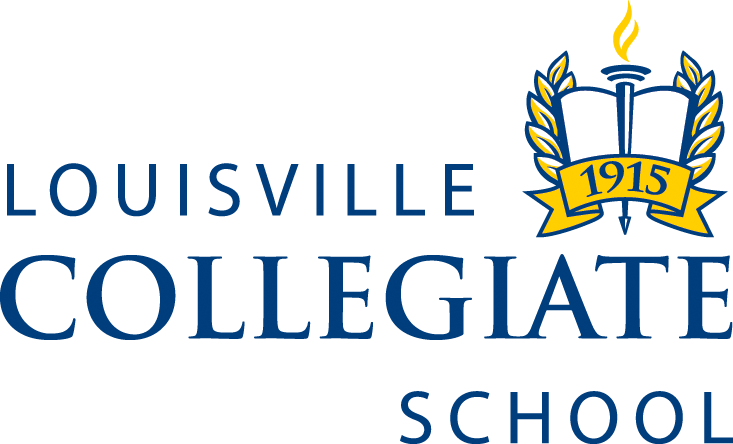 Louisville Collegiate School opened its doors on September 2, 1915, in a house on West Ormsby Avenue in Old Louisville, becoming the first school in Kentucky committed specifically to prepare young women for college. This progressive vision was brought to life by Virginia Perrin Speed (1879–1968) and her husband William Shallcross Speed (1873–1955), the principal founders and sustainers of the school in its formative years.

The Collegiate community celebrated its first graduation in 1916, the same year that the school’s official crest was first printed. The crest reflects the classical training of Collegiate’s first instructors, incorporating the torch of knowledge passed to humankind by the Titan god Prometheus, the Greek laurel wreath awarded for noteworthy achievement, and an open book of learning.

Needing more land to accommodate growing enrollment, Collegiate moved in 1927 to its current home on Glenmary Avenue in the historic Cherokee Triangle, just east of downtown Louisville. The new schoolhouse, in Georgian Revival style, was the creation of Frederic Lindley Morgan, who also designed Louisville’s Pendennis Club, Second Presbyterian Church, and St. Francis in the Fields Church. The new building, which remains integral to the campus 87 years later, cost $115,000 to build.

Throughout Collegiate’s early decades, the school intermittently experimented with enrolling small numbers of boys in the primary grades. The Lower School eventually committed to a fully coeducational program in 1973. In 1980, Collegiate’s Board of Trustees charted another bold, new direction: coeducation in the Upper School. To accommodate the increase in Upper School enrollment brought about by coeducation, Willig Hall was built for $1.5 million in 1983. The first coed class graduated in 1987. Today, the school is nearly balanced in its number of enrolled boys and girls.

In the early years, Collegiate’s administration frowned upon interscholastic athletic competition. Only intramural sports were offered at the school, with an occasional contest against local schools, until 1933 when, in an act of defiance, a group of spirited Collegiate girls formed an independent interscholastic team to compete in the wider community. School administration tried unsuccessfully to forbid participation, but the students persisted and a strong athletic tradition was established under the Amazon banner. When the school formally adopted an interscholastic sports program, it also formally adopted the Amazon name. And, when male student-athletes began representing the school in interscholastic competitions during the 1980s, Collegiate again turned to its classical roots, adopting the Titan name for its male athletic teams.

As part of the school’s master plan, Collegiate launched the 2001 Leap Without Bounds campaign in order to further expand its Upper School program. The $12 million capital campaign featured a new 62,500 square-foot Willig Hall for grades 9-12, and the Mary Rodes Lannert Athletic Center, as well as the purchase and development of a 24-acre athletic facility at Champions Trace.

In recent years, Collegiate has continued its proud tradition of academic excellence by establishing new and innovative programming. In 2006, the school established Kentucky’s only Chinese language program for grades 6-12 on a single campus by signing a Memorandum of Understanding with the schools of Jiujiang, China to establish annual student exchanges. In 2008, the school opened a Junior Kindergarten, becoming the only National Association for the Education of Young Children (NAEYC) accredited program in Louisville attached to a K-12 school. In 2015, Collegiate became the only school in Kentucky to become a member of the prestigious Global Online Academy (GOA). In 2013, the Board of Trustees voted unanimously to launch a comprehensive campaign to support endowment, facilities, and operations. The focus of the Second Century Campaign is not only to transform the landscape of the school but more importantly to provide the resources necessary to transform teaching and learning for faculty and students for years to come.

Collegiate celebrated its Centennial during the 2015-16 school year with many opportunities for the community to come together in honor of 100 years of academic excellence. In August 2017, Collegiate dedicated its Second Century Campus, with expanded facilities to meet the evolving needs of our faculty and students.